A collection of exclusive pieces to celebrate Tanagra’s 40th Anniversary

A pillar in our region’s homes - Tanagra establishes itself as the leading destination for luxury lifestyle, art de vivre, decorative pieces and the ultimate gifting destination, as it celebrates its 40th anniversary this 2021.

Coveting some of the most exquisite luxury home brands, Tanagra is a home for the finer things in life. Our brands come from all corners of the globe, where values are shared in the ‘arte de vivre’. Some of these brands have been with us along our 40 year journey, since opening our doors in 1981 – and to celebrate this journey with us, they have created a very special set of exclusive products that we now bring to you.

In honour of Tanagra herself and the 40th Anniversary, Daum creates a special edition of the Tanagra Daum Statue. It all goes back to the 1870s to 1880s, wheren a Greek statuette made its appearance in French museums. Named Tanagra, this figurine was a terracotta statuette that appeared in Greece in the 4th and 3rd centuries BC. With finely worked details, it represented a woman wrapped in a draped coat. Figuratively, the name is thus attributed to a young woman remarkable for her grace and finesse.

During this period. Antonin Daum and Almaric Walter developed a technique of translucent glass paste. Antonin Daum chose Tanagra, this Greek woman of natural elegance, as one of the first models he created. Thus, “Tanagra with a fan” was created by Daum in 1905.

Originally created in terracotta color with a slight graduation of color, it is now adorned with sublime shades of red for the exclusive creation dedicated to the 40th anniversary of Tanagra.

Discover more from our exclusive 40th Collection at Tanagra this 2021. 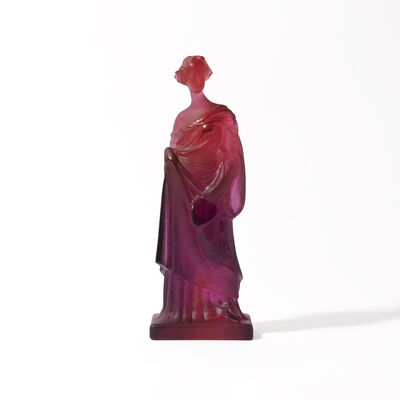